On Saturday, The San Pedro Sun received information of a crocodile’s carcass found south of San Pedro. Photos of the carcass were taken and submitted to Chenot-Rose who determined that the carcass was only a few weeks old. The crocodile was missing its head since there was no sign of a cranium, snout or teeth on the carcass. Chenot-Rose states, “A croc’s head is next to impossible to remove from the carcass as the hide is fused to the cranium plate; and, the photo showed a clean cut at the jaw line. This was only done by human hand.” 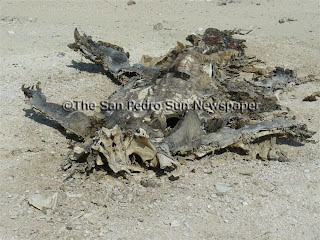 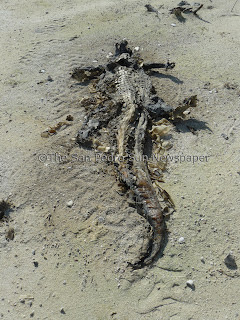 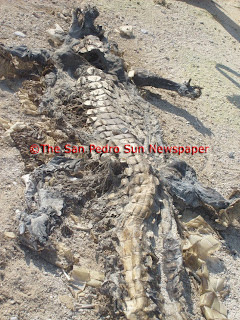 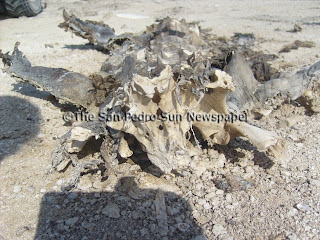 On Saturday, July 19th, members of American Crocodile Endangered Sanctuary (ACES) and Belize Forestry Department were in San Pedro working on relocating crocodiles from the lake across from Banyan Bay. Along with the three hundred pound eight foot two inches adult female, ACES managed to relocate a two foot eight inch crocodile which was found in the DFC Area. The crocodile was named Rodney and transported back to ACES headquarters in Punta Gorda. ACES discovered that the DFC homeowner, who caught Rodney, did so by placing a stick in its mouth which caused damage to the palatal valve. ACES directors decided to keep Rodney under their care until it healed and then planned on releasing it in the Rio Grande River. However, last Thursday, Rodney unexpectedly died and a necropsy was carried out to determine the cause of death. 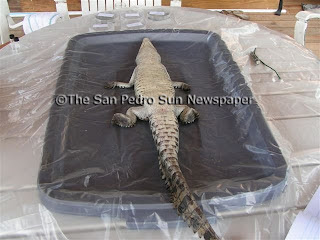 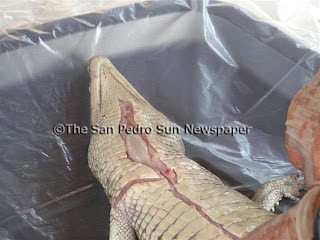 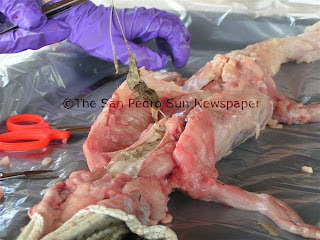 During the necropsy six inches of fishing line were found lodged in the animal’s throat. 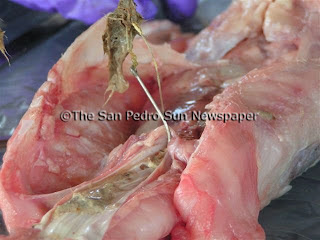 At the end of the line, there was a two inch fishing hook wedged into the animal’s stomach. 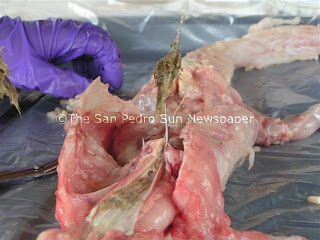 According to Biologist Cherie Chenot-Rose, Executive Director of ACES, the hook and fishing line was, “without a doubt the cause of the crocodile’s death. We must continue our efforts to educate the public and relocate those crocodiles in danger of being harmed. FINES NEED TO BE ENFORCED. Read more in Thursdays issue of The San Pedro Sun.
Posted by The San Pedro Sun Newspaper at 3:24 PM