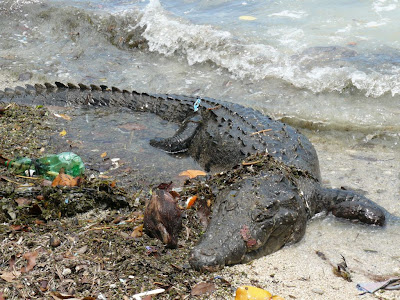 The stress Ripley endured, along with the severity of his injuries has caused him to contract septicemia. Ripley is now suffering and death is inevitable. ACES takes condolence in knowing that at least Ripley got to spend his last few weeks swimming around and interacting with other crocs, as opposed to dying chained to a tree in the surf of the Corozal Bay as a spectacle. Although he is very sick, he still kept his individual croc personality. Few got to see him, and those that did felt his anguish and prayed he'd recover. One could look beyond Ripley's 'empty eyes' and actually see the life he so effortlessly tried to cling onto, making one feel the need inside them to be alive.

The question we here at ACES now have to ask ourselves, are we holding onto him for his benefit of survival or for our indefinable reasons of selfishness? It is time to say goodbye to one of Gods dearest creatures and we hope and pray that his strength to survive can teach the people of Belize how fortunate they are to have this magnificent species in their waters and to take pride in all the wildlife that is found here; for each species, however minute or dangerous, plays a vital role in their very existence by keeping Belize's precious environment in balance.

ACES asks that everyone who reads this, no matter what country you live in, take a moment today to stop and take in this amazing World we live in; and how just like Ripley, no matter what bad we do to it as humans, it struggles to survive to keep us alive. And remember, that if we don't start changing our behaviors collectively to treat it with more pride, someday, it too will no longer exist.

As a result, and due to being unequipped to properly tend to the severity of Ripley's injuries, combined with the exhausting search of relatively minimal funding available for crocodiles (which I attribute to their lack of fur), ACES is willing to try to start a modern facility in Punta Gorda to treat wildlife and local pets, a HUMANE Society. ACES owners will give the use of a personally owned concrete building in PG Town toward the cause if we can get enough supports to make this facility come true. If humanity to animals is the lesson of this story, let's start with all the neglected pets due to poverty and lack of availability of assistance and materials. And once such a facility is in place, someday it may also save the life a wild croc, or a wild fox like Foxie. 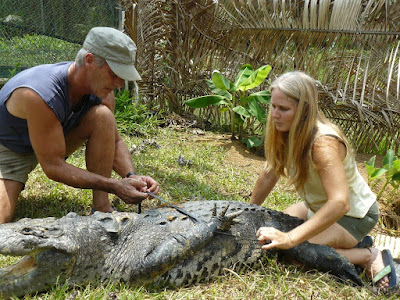 Thank you, with all our aching hearts at ACES, to all of you who assisted with Ripley's rescue, the rescues of all the crocs here at ACES, and all of you who support and have assisted directly and indirectly with ACES's Croc-Crusade.


For more information about ACES and how you can help please visit their website at: http://www.americancrocodilesanctuary.org