On Thursday December 23rd at around 10:00am, Vince Rose and Cherie Chenot-Rose of ACES (American Crocodile Education Sanctuary) received a phone call from the San Pedro Police Department informing them that the Police had confiscated a small American Crocodile. According to information received from the police, a man was seen walking in the San Mateo area, with the crocodile. The man was informed by the police officer of the risk he runs by having the crocodile in his possession. The police then took the crocodile and placed it in the care of the ACES team. 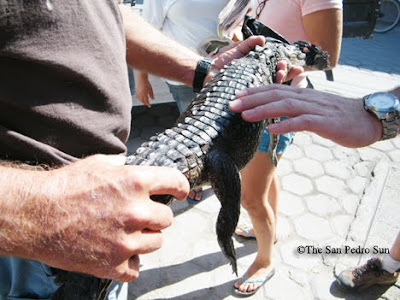 According to Biologist Chenot-Rose, the croc appeared to have been a captive animal as it was suffering from a condition called Belly Rot – Brown Spotting Disease, which is prevalent in ill kept crocs. The croc measured 40 inches (3ft 4in) and weighed about 10 pounds. There was a mark where it appeared to have been hooked in the back. The ACES team administered medical attention to the confiscated crocodile and held it under observation for 12 hours after which it was tagged and re-released into a small canal on the southern end of the island near the Port Authority. 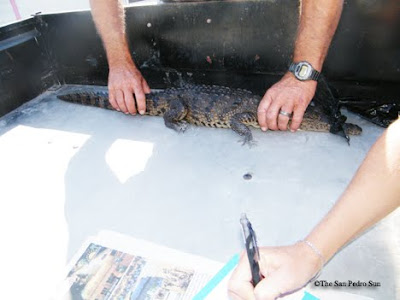 The general public is reminded that it is ILLEGAL under the Laws of Belize Wildlife Protection Act, to capture, feed, harass or handle, or have in your possession any parts of a crocodile (including claws, teeth, skulls, skin, including use for jewelry). If caught, the first offence carries a fine of up to $500.00 and the second offence carries a fine of up to a $1000.00 and/or six months imprisonment. 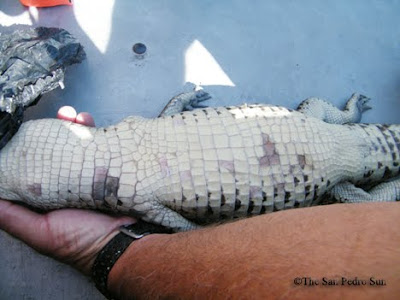 Should you have a problem crocodile in your area, know of people illegally feeding or harassing them, or know of ones that are in illegal captivity you are asked to please call the Belize Forest Department at 822-1524 or ACES at 666-3871 or 631-6366.
Posted by The San Pedro Sun Newspaper at 11:32 AM