For years Liz Ross has been trying to get someone to help her with her crocodile problem on Caye Caulker. Liz owns and operates the only fuel station on the island. Finally, on Sunday, January 23rd, she received some help. 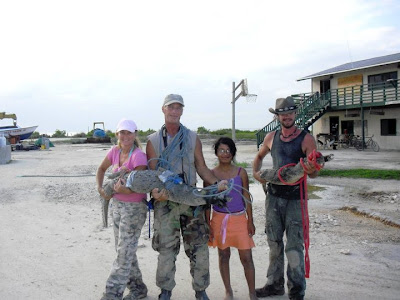 ACES/American Crocodile Education Sanctuary, now located on Ambergris Caye, loaded up the ‘Croc Runner’ and headed to Caye Caulker early Sunday morning. Having never navigated these waters, the 15 minute boat trip took quite a bit longer and cost Cherie (ACES biologist and First Mate) some more fingernails. Somewhere between the two cayes, all of a sudden, coral heads surrounded the ‘Croc Runner’. With Cherie sitting on the bow and pointing the way between the treacherous obstacles, Vince (ACES animal behaviorist and Captain) was able to safely get the boat to the cut. Channel markers sure would have been nice!
Arriving late morning, the ACES team of Vince, Cherie and Chris got straight to work. By noon the first croc was caught. Measuring at 5’ 7” and named “Jockey” by Liz’s daughter, the male American Crocodile was extremely aggressive. With him safely secured ACES reset the snare and shortly after lunch had caught the second smaller croc, a female this time, measuring 4’10” and now named Matilda. 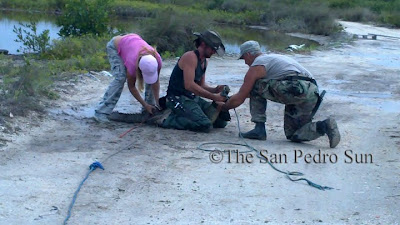 The ‘Big Guy’ is about 10’ in length and eluded the ACES team all day. “We had spotted him when we first arrived and then we never saw him again,” stated Vince. ACES will need to set a net trap and spend a night or two to catch this smart croc. Without sufficient funding, they are not sure when they’ll be able to return to Caye Caulker.
ACES utilized funds from their recent Rufford grant for the rescue effort. Since the grant is for a croc population survey of the area, now that a count has been done in that area, no more monies can be allocated for the rescue. Liz does not wish to see ‘Big Guy’ harmed in anyway and is seeking in-kind donations of lodging and meals for the ACES team to be able to return to catch it before it harms someone. Liz herself is generously donating boat fuel for the team to return and relocate the large American Crocodile. “‘Big Guy’ lays under the fuel tanks at the waters edge and waits for my workers to pass to try to attack. It has already eaten several of my pets,” states Liz. The real fear is that it could attack an unsuspecting tourist who likes to get dangerously close for pictures. 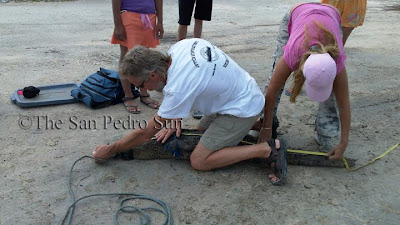 Where are the captured crocs being taken? With no facility in place yet since the arson of ACES, the team is forced to just relocate the crocs to nearby uninhabited cayes. This is fine for these two smaller crocs, but the ‘Big Guy’ really should be placed in a secure habitat so that he doesn’t return or become someone else’s problem, states Cherie. While there is talk of a new croc facility being built on the mainland, it is still many months from getting started.
Anyone wishing to help, ACES is in need of: a digital camera/video, two nights lodging on Caye Caulker, meals for those three days on Caye Caulker, electric tape, duct tape, ropes, and chicken for bait. Donors for the Caye Caulker capture can contact Liz Ross or ACES at acesnpo@hughes.net or 666-3871. Your help will take a bite out of extinction!
Posted by The San Pedro Sun Newspaper at 6:00 AM