Croc Being Illegally Harassed is Rescued
On Jan 13th, the American Crocodile Education Sanctuary (ACES) received a call from the San Pedro Town Council about a croc in DFC near W&W Store. This time it wasn’t humans that were in peril, but the small crocodile that was stuck in a polluted water hole no more than 2ft deep. Every time the animal would come out to sun or try to escape kids would throw rocks at it, so obviously that croc needed to be rescued. On Wednesday, Jan 19th, ACES did just that.

At 11 am the ACES team arrived at the site. A few neighbors came out to watch and help if necessary. A couple children who were watching reported that just minutes prior to our arrival, some other children were again throwing rocks at the poor croc. Seems ACES arrived none too soon.

By 11:20 the croc was rescued, data collected, tagged and re-released in a secluded lagoon area south east of Port Authority. Although the 5ft 8in croc suffered several injuries to her back from the rocks, she seemed otherwise healthy. Swimming ‘happily’ in her new habitat, we don’t suspect she’ll try to return to DFC.

Some people may say kids will be kids; but throwing stones at crocodiles is illegal. American crocodiles, named so because they are only found in North, Central, and South America, are a protected species in Belize. Belizeans should be proud to have them here. Worldwide there are not many of their species left. We need them to keep the island’s environment healthy; so we must start trying to safely co-exist with them.

Vendors Illegally Selling Protected Species Parts
While kids may be kids, it is the adults who set the precedent for their behavior. Children learn by example, and on Thu 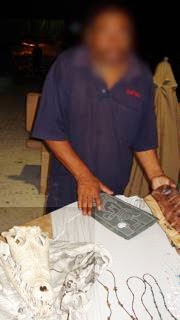 rsday night, Jan 20th, around 7pm ACES received an anonymous call that there was a crocodile skull for sale at the town square. Not only is this illegal in Belize, but it is illegal worldwide to have in one’s possession any part of an American Crocodile, Crocodylus acutus, without the proper permits. Additionally, ACES was told that the vendor was wrongly informing tourists that they could indeed cross international borders with the skull. In the USA, the offense of smuggling a crocodile skull across International borders is punishable by up to twenty (20) years in a federal prison. I have to ask; how would Belize look as a country when an otherwise innocent tourist is arrested for smuggling crocodile parts, and then tells the world that a Belizean not only sold them the illegal croc skull, but also told them it was okay to take it across International borders?

Belize Forest Department (BFD) Wildlife Officer Rasheda Garcia- Sampson had just recently informed all the vendors that it is illegal to sell or even to have in one’s possession parts or pieces thereof from any protected species, including but not limited to crocodiles and jaguars. Some vendors evidently think they are above the laws of Belize. Thanks to communications between Chief Arnold and the BFD, for the first time on Ambergris Caye, the San Pedro Police was able to enforce this law of the Belize Wildlife Protection Act (Chapter 220) and confiscate the illegal croc skull. For now, the skull will remain in the possession of the SP Police Department. ACES hopes to be allowed to use the skull in upcoming educational presentations on crocodilians and how to safely co-exist with them that will be open to the public and available to schools here on the island.

ACES sends a great big Thank You to everyone involved with both croc cases. Your help is taking a bite out of extinction!

ACES's mission is commitment to conserving Belize's critical habitats and protected species through scientific research and education to prevent further extinction of species Worldwide and to preserve Belize's wildlife for future generations. For more information about ACES or to report a problem croc please call 666-3871 or 631-6366.
Posted by The San Pedro Sun Newspaper at 11:42 AM

kids may be kids - but it should be the responsibility of their parents to teach them respecting animals of any kind.