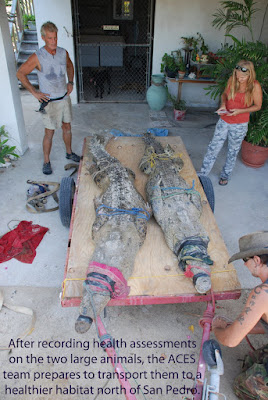 survey. Attracted by three carts of people at WASA, the team stopped only to see one of the same problematic crocs that they had caught six months ago. This croc, missing a hind foot, is exceptionally fearless of man and extremely dangerous. When ACES croc behaviorist Vince Rose splashed the waters edge the croc immediately charged. Catching the team off-guard Vince was forced to quickly fix a lasso and catch the croc. The croc was so hostile that the rope was handed off to croc conservationist Chris Summers and Vince choose to jump on the head of the croc to subdue the animal. No sooner than catching the croc, a second croc aggressively approached the team as they worked quickly to secure the first croc. With no alternative, the team wrangled the second croc. Rite-Way General Contractors again generously donated transportation of the large apex predators to the Sniffin residence for safe keeping for the night. Sadly, both animals were in extremely poor health and condition with severe bite injuries most likely from a larger croc. Feeding the crocs is illegal. Not only does it make them more aggressive and prone to attack a human, but it also makes them attack each other as they fight for the free, easy meal. This was the first time ACES had caught the second croc. The croc had suffered a severe attack and was missing the larger part of its tail. It may not survive. Because of the injuries, or maybe due to a lack of prey in the WASA lagoon, both reptiles were starving. Due to their slow metabolism, it can take a large croc a year to slowly and painfully starve to death. This is just one more reason for supporting ACES relocation efforts of removing the largest predators from that area. 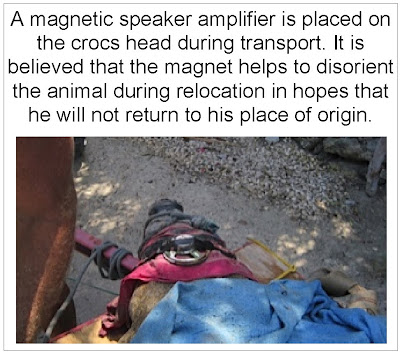 Testing a new theory, magnetic amplifiers were taped to the croc’s heads for their relocation to a secluded area north of San Pedro. Scientists believe that crocodilian’s spatial orientation is geared by the magnetic poles, much like in migratory birds. The idea is the magnets in the amplifiers will keep the animals from memorizing where they were relocated from and then will be less likely to return to their point of origin. Both crocs were tagged by scute-clipping prior to release for identification and for DNA and toxicity studying. The large animals were transported on a trailer donated by Tyler Cornell and Legends Burger House.

Croc Talk at the San Pedro Library
Lunchtime Monday the 28th at the San Pedro library was full of curiously excited students when Cherie and Vince of ACES showed up with a 3ft live American crocodile, of course it’s mouth was taped shut! Invited by SP Librarian Iracela Acosta and reading enrichment volunteer Liz Gibson Richards, the program started with some children reading out loud about crocodiles from books. Cherie then gave a question and answer presentation on the biology of the crocodiles found in Belize and the Belize Wildlife Protection Act (Chapter 220) that protects them. Always reminding the children that one has to go to sc 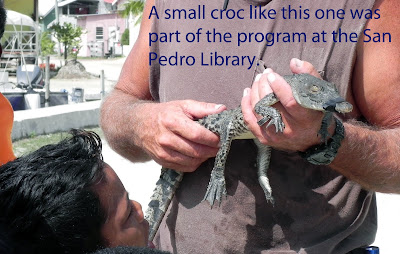 hool for proper training and then be permitted by the Belize Forest Department in order to work with any of Belize’s protected species, including crocodiles. At the close of the session each student who raised his or her hand and gave one crocodile fact was allowed to view the small reptile up close. It was very educational for everyone, and at the close of the presentation Mrs. Richards and Cherie brainstormed about the idea of a “naturalist” after school club for interested student. Anyone wishing to help, or would like to have an ACES presentation, please email Cherie at acesnpo@hughes.net. 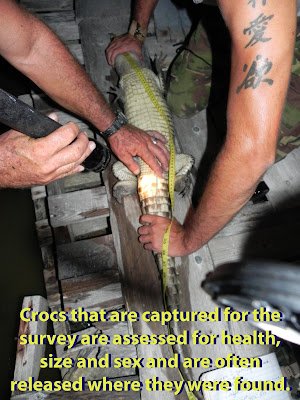 From December 2010 to February 2011, one hundred and thirteen American crocodiles Crocodylus acutus were observed during spotlight and daylight surveys of a 72.42 km route (1.56 crocodiles/km) through coastal, mangrove, and lagoon habitats in Ambergris Caye, Belize. Of these, 32 (28.3%) were classified as ‘eye-shine only,’ and the remaining 81 (71.7%) where classified as hatchlings (20; 24.7%), juveniles (7; 8.6%), sub-adults (26; 32.1%), and adults (28; 34.6%). Out of the twenty-three tagged crocodiles, 12 (52.2%) were males and 11 (47.8%) were females. One Crocodylus acutus captured exhibited intermittent ventral scutes post cloacal. While this lends to the possibility hybridization (cross breeding of American and Morelet’s crocodile), DNA testing is needed for confirmation. Another C. acutus was captured with a ‘marbled eye.’ The crocodile’s vision did not appear impaired. A full report will be published in the next Crocodile Specialist Group newsletter. For grant opportunities go to http://www.ruffordsmallgrants.org/

Interview with Vince and Cherie Rose of ACES after the arson of ACES/American Crocodile Education Sanctuary by Wildlife Photographer Brandon Sideleau.
Be sure to tune into the one-hour croc log podcast and learn about Crocodilians and hear the latest croc news with Croc Expert Adam Britton and Wildlife Photographer Brandon Sideleau. Link: http://crocodilian.blogspot.com/2011/03/croclog-podcast-episode-4.html

Always remember to call ACES at 631-6366 if you have a croc problem or witness a croc crime.
Posted by The San Pedro Sun Newspaper at 10:13 AM