For Immediate Release - May 11, 2011 - American Crocodile Education Sanctuary - Saturday, May 28, 2011 Legends Burger House, located north of San Pedro Town on Ambergris Caye, is hosting the fundraiser of the year to help raise awareness and funds for crocodile conservation in Belize. The event will start at noon and continue through the night. There will be live music, including Gino and the Shack Shakers, food, beer, Crocoladas, piñatas, raffle prizes, a silent auction, educational crocodile displays, and fun for the whole family. Prizes include diving packages, dinners for two, artwork, and more. Not only is there no cover charge, but also you do not need to be present to win prizes. Thanks to the San Pedro Town Council the bridge fee will be waived for those attending.
There are less than 10,000 American crocodiles in the world today. ACES not only rescues problematic, ill, injured, and illegally kept crocodiles countrywide, but also is currently conducting an American crocodile population and habitat viability assessment on Ambergris Caye. This research will provide the Belize Forest Department with valuable information to devise a strategic crocodile conservation plan that will help save the species and while keeping human populations safe. Funds raised will be used for relocating problematic crocodiles from private and public areas and crocodile education. ACES will attend every school in Ambergris Caye and inform students on how to safely coexist with these apex predators. 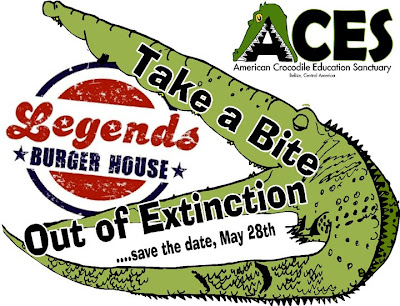 ACES is also in the process of building a public educational crocodile eco-sanctuary on the mainland in Ladyville where ill, injured, and problematic crocodiles can live out their lives and while teaching people about the importance of these apex predators in Belize ecosystems.
Please come to Legends Fundraiser and help save these important apex predators. In laboratory studies, researches are finding that serum from crocodile blood kills HIV and Herpes viruses.
Bridge passes for the event are available at The San Pedro Sun, Legends, and ACES.
Come Help Legends Take a Bite Out of Extinction!
ACES/American Crocodile Education Sanctuary is a non-profit organization, permitted by the Belize Forest Department, dedicated to the conservation of Belize's protected species, specifically crocodilians, through scientific research and education in order to preserve Belize's wildlife for future generations.
An update on ACES American crocodile population and habitat viability assessment in Ambergris Caye, Belize, was published in the Crocodile Specialist Group Newsletter and can be downloaded in PDF format from: http://americancrocodilesanctuary.org/apps/documents/
Prize donations are still welcome and can be made by calling 631-8162 or email acesnpo@hughes.net
If you cannot attend and still wish to help, donations can be made via check Payable To: ACES and mailed to: Cherie Rose, General Delivery, San Pedro Town, Ambergris Caye, Belize; direct deposits can be made to Belize Bank Acct#630-2-2-21-5255; or wire transfers from the USA can be sent to: Bank of America, Swiss Code Address: #BOFAUS3N, ABA#026009593, Belize Bank Acct#6550-8-26053, For further credit to: ACES Acct#630-2-2-21-5255.
Posted by The San Pedro Sun Newspaper at 9:28 AM