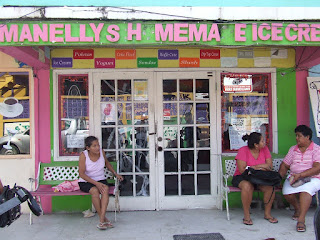 After a long three day weekend celebrating the Pan American holiday, on Tuesday, October 14th thieves targeted the Manelly's Ice Cream Parlor located on Barrier Reef Drive in search of quick cash. Clemencia Uribina, employed at Manelly's for the past four years, explained that the day started out just like any normal work day. Upon arriving at the establishment, she noticed that her co-worker, Mariela was already there with Mrs. Shelly del Valle. Work continued as normal and as she went to retreive the broom from the back of the building, a young man, grabbed her and told her to get back inside, "esto es un asalto [this is a robbery]."
According to Urbina, there were two culprits who asked them to lie face down on the floor while the robbery continued. "'Si gritan matalas [if they scream, kill them],' they kept saying," explained Urbina. According to the witness, both men held knives to thier throats at different times throughout the incident.
Police officers are still processing the scene and an official report has not been released. It is uncertain as to how much cash was stolen but another report suggests that the robbers dropped their bag of loot while making their escape along Angel Coral Street.
We'll have more on this story in Thursday's edition of The San Pedro Sun, stay tuned!
Posted by The San Pedro Sun Newspaper at 10:20 AM 1 comment: