Belize Electricity Limited advises its customers in San Pedro Town that the supply of electricity will be temporarily interrupted from 9:00 a.m. to 2:00 p.m. on Friday, March 18, 2011.

BEL apologizes for the inconvenience caused but this outage is necessary for the company to facilitate system improvement works on the distribution system in the area.

For customer inquiries and services call us toll free at: 0-800-BEL-CARE OR 0-800-235-2273. To view scheduled outages via our website visit: http://www.bel.com.bz/services_outages.asp
Posted by The San Pedro Sun Newspaper at 3:18 PM No comments: 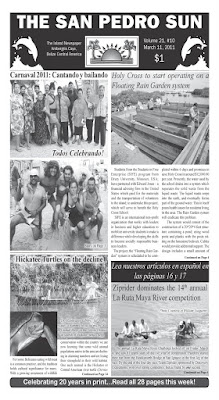 Below is a history of The San Pedro Sun, edited from e-mail correspondence from the late Bruce Collins, who passed away in December, 2009. Bruce and Victoria Collins started The Sun in 1991.

The Coconut Wireless was the first paper to be sporadically published on the island and Linda Cornelison was the owner, editor and publisher. Other residents on the island including Victoria and myself [Bruce] and Woody Canady worked with Cornelison to put out the first issue using Linda's computer, with a broken hard drive and only one floppy disc worked. Shortly after, Cornelison had to return to the states for medical reasons and she asked that we and Canady keep printing the paper. We printed thirteen issues and managed to get the publication out of debt. In November, 1990 Cornelison returned to the island and took over publishing the Wireless again. Plagued with personal problems, Cornelison managed to sporadically print The Wireless but ran into legal problems and was incarcerated for some time. Eventually the The Wireless failed to exist.

In the meantime we were in the stage of starting our own newspaper but waited until the inevitable demise of The Wireless. On March 14, 1991 the first issue of The San Pedro Sun was printed. Our first office was in Fido's using a Brother word processor and I kept asking Victoria, "Tell me again we can do this newspaper on a word processor." Well, we did until we bought our first computer from Jeanette Salfeety who was working in San Pedro for her environmental group. It was really cut & paste! (end) 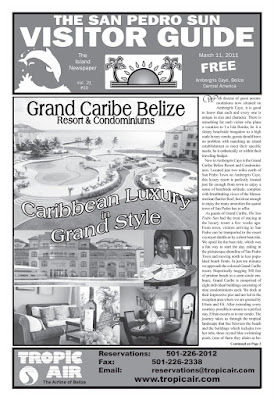 to Dan and Eileen Jamison and in 2004 Ron and Tamara Sniffin purchased the paper from them. In 2006 Bruce Collins wrote, “Victoria and I have been talking about what a fine job you and your staff have been doing at The San Pedro Sun. You seem to have the same philosophy as we did and have even figured out how to make money on the web (The Visitor Guide) while promoting the community at the same time. That escaped us at the time we started going on the web. We knew there was a way to do it and you have found it. The Sun looks professional and fulfills a need in the community in a positive, dignified way. We couldn't be more pleased it is in your and your staff's hands. Thank you for continuing to send it to us. We know you will continue to get better and better. Thank you for keeping our love affair with San Pedro and The Sun alive and well. We hope to meet you some day; you're doing a wonderful job. The newspaper is everything we hoped it would be.”

The San Pedro Sun has the community to thank for our years of success and we are proud to be the voice of the people. We look forward to a long and prosperous future and embrace all of those who have helped us along our way as we have grown into what we are today. Thank you all!

We also honor Mr. Collins on this day and he will be remembered always.
Posted by The San Pedro Sun Newspaper at 9:27 AM No comments: