The San Pedro Lions Club on Friday made two donations; one to a local resident and the other to an institution. Zone Secretary Lion Kainie Manuel and local Club Secretary Lion Jorge Aldana handed over food items on behalf of the club to Mr. Dale Ellis and to Holy Cross Anglican School. 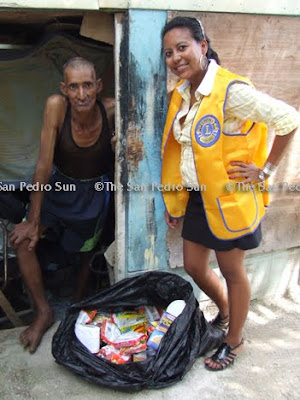 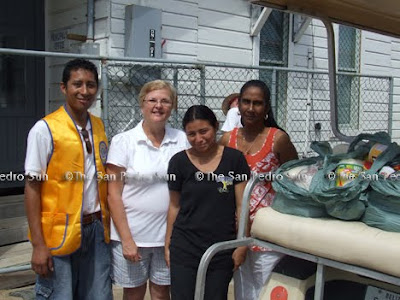 Ellis expressed his gratitude to the Club for the generous donation, as did authorities at Holy Cross. Those authorities indicated that the items will be used as part of the school’s feeding program.
Posted by The San Pedro Sun Newspaper at 12:35 PM No comments:

The American Crocodile Education Sanctuary (ACES) located in the Toledo District received a well needed donation from Grand Belizean Estate Limited. The donation was in the sum of Belize $5,000 and will be used in the construction of a secure, natural habitat for crocodiles relocated to ACES’ facilities.
In a press release, ACES stated when relocating problematic crocodiles, their facility required a secure, natural habitat. The reptiles removed by the Forestry Department originate from various areas in the country and are taken to the ACES facilities. Crocodiles which have been removed from Ambergris Caye’s ecosystem have also found a home at ACES sanctuary. 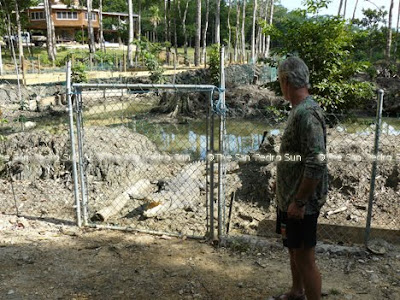 ACES facility in the Toledo District

Grand Belizean Estate Managing Consultant Francisco Alvarado told The Sun that upon learning about ACES’s needs, Grand Belizean Estate did not hesitate to generously donate to the initiative. “We were impressed with the work ACES is doing to save these incredible animals. We became very much interested in contributing to the cause therefore we decided to make such a donation,” stated Alvarado. He added that they will continue to support ACES in their efforts to promote the protection of the American Crocodiles in Belize. He stated that Grand Belizean Estate has also committed their support to ACES’s desires in establishing a facility on the island, similar to that in the Toledo District.
With Grand Belizean Estate’s efforts to assist, ACES hopes to come up with a much need population assessment of the number of crocodiles and potential nesting sites in the area. Grand Belizean Estate stated that their donation is just one way they are giving back to the community. For the time being ACES said that the donation will help them significantly in the purchasing of some of the materials needed for the commencement of a 10,000 square feet containment area for the crocs. ACES is still short of $16,000 and are welcoming any donation. You can contact ACES by calling (501) 665-2762.

Posted by The San Pedro Sun Newspaper at 12:04 PM No comments: