Gene Simmons films on the island

Rock icon Gene Simmons (founding member of KISS) is on the island where he is filming for his A&E show Gene Simmons Family Jewels. 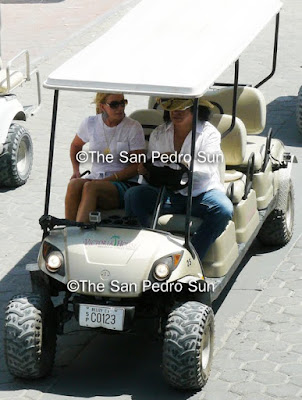 The San Pedro Sun caught a glimpse of him and wife Shannon Tweed as they drove down Barrier Reef Drive with cameras etc... 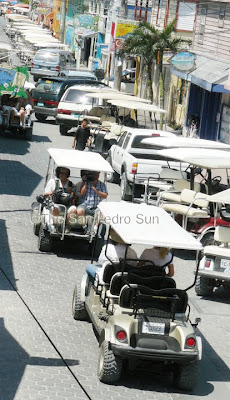 Posted by The San Pedro Sun Newspaper at 2:01 PM No comments:

Press Release – Ambergris Caye Chamber of Commerce - May 5, 2011 - The Ambergris Caye Chamber of Commerce came into being with the signing of documents on November 7, 2002 and was registered as a Non-Profit Organization December 17, 2002. The first officers were Tom Vidrine, Boatyard; Malcolm Hitchcock, Fido’s; Melanie Paz, Amigos del Mar; Keith Newton, Palapa Ventures; and Debbie Sharko, Iguana Gardens Apartments. We would like to thank these people (and others) for bringing this important organization to San Pedro Town. During the time of organization, a multitude of talented and thoughtful people gave leadership and direction to much needed subjects for our town. Accomplishments were many. They addressed beautification of the town, safety issues on the water and streets, safety of the citizens in working with the Police Department and national issues of importance, among others.

As personal agendas changed, the San Pedro Business Association splintered off to cover issues which they felt they were more in tune with. Mr. Vidrine continued to head ACCC, but a leadership role for a long time takes its toll also. June 2010, Tom decided to step down. He was also leaving the country for an indefinite time. At a moments’ notice, the roll of Acting President was given to me as the First Vice President. Sadly to say, it was during an extremely busy time for me while working on the Marco Gonzalez Maya Site Project. My dance card was full; I was not in a position to lead the Chamber. Although we tried to restart it over the last few months, no one else has agreed to take the Presidents’ position and form a new slate of officers. The San Pedro Business Association is, however, discussing merging with the Chamber.

Times have changed and the Chamber is now calling it a day for now. It is a good organization – a prestigious organization – for any town to have. When it is time and the need is there, leaders will again come forth to start anew. A quote from Chris Emmanuel last week was, “Make experience the only success and you will never fail”. He talked about the fact that we all like to win, but sometimes you have to accept losing as winning at times. To “embrace failure and see the wisdom from our efforts……and see the beauty of doing our best in all situations.”

The Ambergris Caye Chamber of Commerce was a winner. We did our best. Thank you San Pedro.

At the final meeting, Rebecca Arceo from the San Pedro Business Association (SPBA) attended and invited members from both organizations to attend a meeting on Wednesday May 11th, 4pm at El Divino. A discussion will be held regarding the possible merging of the organizations into the San Pedro Chamber of Commerce.
Posted by The San Pedro Sun Newspaper at 6:05 AM 1 comment:

SAGA receives calls daily about animals that need their help. Whenever a member of staff picks up the phone, they can only hope and pray for a happy ending because calls to SAGA so often have such a tragic beginning. Such was the case when someone called to report that a small dog had been left tied to an abandoned shack in San Mateo without food, water or shelter.
No matter how long a person has worked for SAGA, they never get used to the horrific sights that sometimes greet them when they rescue a dog or cat that has been the victim of cruelty, abuse or neglect. Cinthia’s condition was terrible and her pitiful state just made her rescuers want to weep. She was starving, had a terrible case of Demodex – a non contagious skin disease – so was nearly bald, was dehydrated and suffering from the deadly disease, Tick Fever. 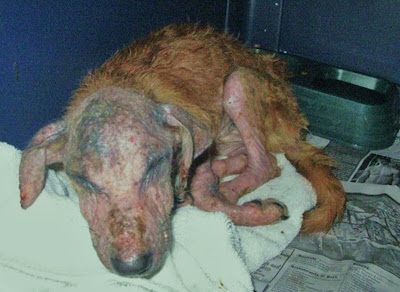 Very little is known about Cinthia’s history before coming into the loving care of SAGA Humane Society. So her tale starts with them. Sometimes it can be difficult to decide whether or not a dog will survive after being subjected to such incredible suffering and it is often entirely up to the dog whether or not they will fight for their lives. After a grueling two months of intensive care and treatment with SAGA, Cinthia proved that she was going to fight and not give up.
As she recovered and gained her strength, along came a couple, Matt & Katina Ewing. It was love at first sight despite the challenge facing them because they just couldn’t afford to fly Cinthia to the USA at the time. Inspired by Cinthia’s fight for life, they didn’t give up and neither did SAGA. After some fundraising, Cinthia headed off to her new home and her new life.
Normally, our tale would end here – but it doesn’t. 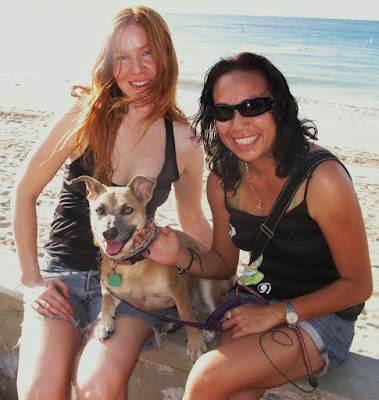 Two weeks ago Katia Marin and Heidi Sowards, SAGA volunteers, were attending a conference in Puerto Rico. Who should they bump into but Katina and Cinthia. It was a joyous reunion and many tears were shed, not because of Cinthia’s sad tale, but because of her amazing happy ending.
Doesn’t every dog and cat that SAGA rescues deserve a happy ending? If you want to give a dog or cat a new life, please contact SAGA on 226-3266.
Posted by The San Pedro Sun Newspaper at 6:00 AM No comments: