The residence of the San Pedro Wings Manager's Establishment was allegedly robbed tonight. According to witnesses, at around 8:30pm the screams of a female resident of the residential level at Wings was screaming for help. Neighbors flocked to the residence in an attempt to offer assistance, however the doors were locked. Further investigations revealed that a male occupant of the residence was later rushed to the local medical facility, seeking medical attention.
It has been confirmed that there is a possibility that the establishment was robbed. However, authorities are currently investigating the situation.
Posted by The San Pedro Sun Newspaper at 9:51 PM 1 comment:


Belize City, Belize, November 16th, 2010 ‐ ‐ Belize Audubon Society is pleased to announce the re‐opening of the St. Herman’s Blue Hole National Park. BAS park directors and wardens have been working ceaselessly in the aftermath of Hurricane Richard to clear the fallen debris from the trails and ge

t the park back to normal operations. The park was re‐opened to the public on Monday, November 15th, 2010. Visitors once again have access to the Blue Hole, St. Herman’s and Crystal Caves; and other activities. A couple of trails, however, have remained closed for ecological reasons so the vegetation in those areas has the opportunity to regenerate. Opening hours for St. Herman’s Blue Hole National Park are 8:00am ‐ 4:30pm every day.

Come on out on Sunday November 21st at the Central Park to support a worthy cause. 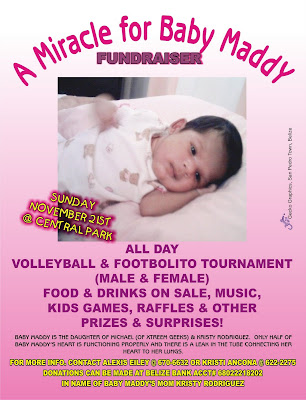 Direct donations can be made to Kristy Rodriguez at Belize Bank account number: 68022218202
Posted by The San Pedro Sun Newspaper at 12:17 PM No comments: