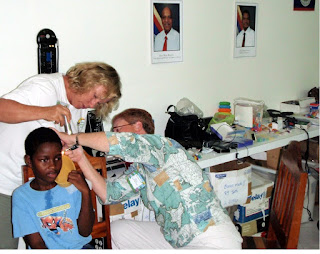 Many thanks to these dedicated doctors for sharing their time and talents with the children ofHoly Cross. After leaving Holy Cross at mid-day, the Audiologists went to the San Pedro Roman Catholic School to provide the same testing for their students! Kudos to all the teams that visit San Pedro and thanks for the great work! 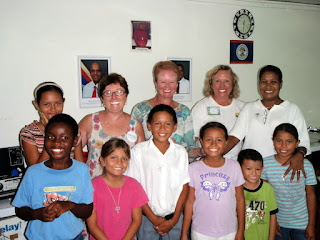 All smiles!
Posted by The San Pedro Sun Newspaper at 3:07 PM No comments:

NOTICE!!
The BPFL would like to inform teams, fans and the general public that the semi-pro football games have been postponed again for this weekend due to the weather. Another tropical depression is expected to pass through and the fields are still not in good condition for the games
to be played. If you have any questions or concerns feel free to contact
the BPFL office at 207-5217.
Posted by The San Pedro Sun Newspaper at 10:02 AM No comments:

Through the hard work and efforts made by the Belize Mission Project, an $800,000Bze donation was secured for the San Pedro PolyClinic through Project CURE. Since the beginning of the Poly Clinic II project, the organization Project CURE had set its sights on the clinic and had promised to supply the facility with equipment and medical supplies. In March of 2006, the San Pedro PolyClinic received a substantial donation of $1.2 Million dollars and it proved to be 90% of the equipment needed to outfit the clinic. This time around, Project CURE donated items that highly reflected what the clinic was in desperate needs of. Some items included: fetal Doppler, centrifuge, syringes, anesthetics, birthing kits, stethoscopes, microscopes, gurneys, scrubs; equipment for the dental clinic as well and a huge gamut of medicines and other supplies. Based on quantity, some of the items donated will be distributed to other needy clinics countrywide, stated Dr. Paul Edwards of the Health Department, Central Region which includes in its jurisdiction Ambergris Caye. 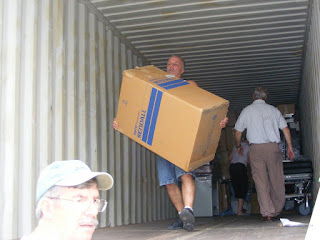 The container was filled to capacity. 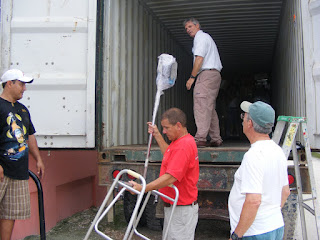 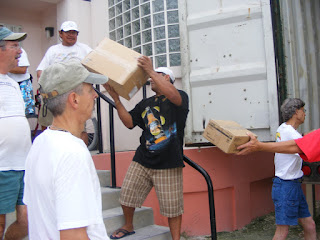 The donation couldn't have come at a better time. 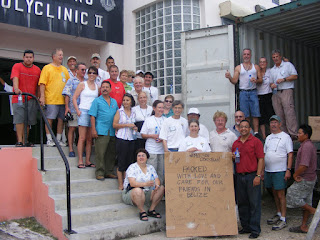 After unloading, the crew gathered up for a group shot! 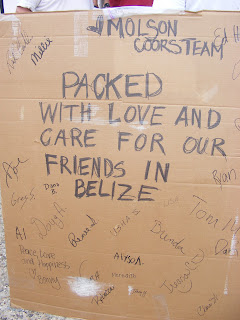 Along with the great donation came a very valuable piece of equipment – an x-ray machine. 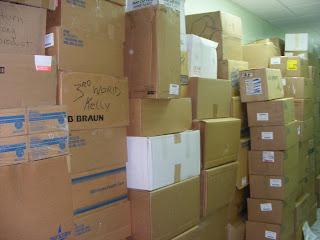 Project CURE, which stands for Project Commission on Urgent Relief & Equipment, is a non-profit, humanitarian relief organization that collects medical surplus and donates it to developing countries. Since 1987, Project CURE has delivered donated medical supplies and equipment to the most desperately ill and needy people living in more than 100 countries around the world. Project CURE’S International Headquarters is located in Centennial, Colorado. Today, Project C.U.R.E. is run by Founder James Jackson's son, Dr. Douglas Jackson. In the past ten years, the Jackson family, along with a small staff and an army of volunteers has expanded their reach to every corner of the globe. Project C.U.R.E. has worked in over 120 countries and has touched the lives of thousands. With the help of many that have the same passion and commitment to helping those around the world, Project C.U.R.E. continues to deliver health and hope to the world!
Posted by The San Pedro Sun Newspaper at 9:41 AM 1 comment: