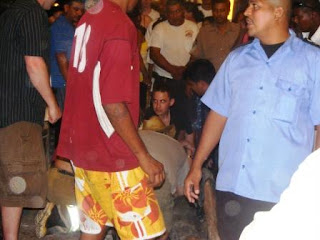 On Friday night, by-standers lined up on Barrier Reef Drive as a man laid on the cobblestones. A traffic accident caused for much glances and looks. The man, bloodied, got up and managed to get into the police vehicle and was transported to receive medical attention. 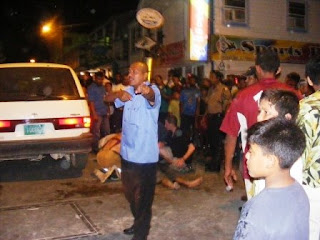 Official Police Report:
Traffic Accident
*Mynor Martinez, 32-years-old taxi driver of DFC Subdivision, San Pedro Town, reported to Police that on Friday, March 27th, 2009 about 8:20 p.m. while he was driving his white Toyota Minivan with license plates SP D0067 at the intersection of Barrier Reef Drive and Black Coral Street, he felt something knock into the passenger side of his vehicle and upon making checks, he observed a male person of Hispanic decent lying on the ground beside a black beach cruiser bicycle. The individual, later identified as Lorenzo Gonzalez, 27-year-old laborer of DFC Subdivision was issued with a pair of legal medical forms where doctor certified injuries as wounding. The incident remains under police investigation.
Posted by The San Pedro Sun Newspaper at 7:04 AM No comments: