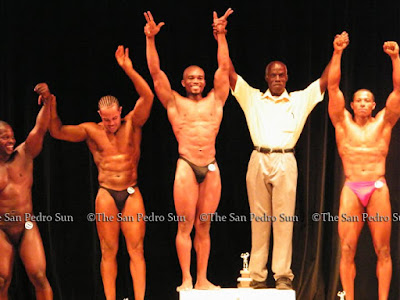 At approximately 8PM Friday night SP Police confirmed that the suspect they apprehended and questioned regarding the murder of Maria Antonia Plaza Gomez was released. According to police the suspect met the physical description of a man reportedly last seen with Plaza Gomez but the individual could confirm that he was a new tourist to Caye Caulker.

Reports are that the suspect was cooperative with the authorities during his interrogation and later the police arranged for his transport back to Caye Caulker.
Posted by The San Pedro Sun Newspaper at 10:52 PM 2 comments: 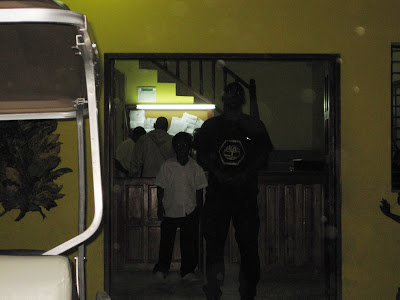 Police Block the View While Suspect is Escorted For Questioning
At approximately 6:30PM tonight police transported a suspect in the Maria Antonia Plaza Gomez murder from Caye Caulker to San Pedro. The suspect, a Caucasian male of approximately late 20's to early 30's in age was of medium build, had a shoulder length blond ponytail and wore a Belize t-shirt. Upon arriving by boat via Caye Caulker Water Taxi the suspect, hand cuffed, was escorted to the SP Police Dept. where he was promptly detained behind closed doors. The SPSUN will continue to update this Blog as the story develops.
Posted by The San Pedro Sun Newspaper at 6:44 PM 2 comments:

-Press Release – Belmopan - 2nd November, 2010 - Professor Sir Hilary Beckles, Pro-Vice Chancellor and Principal of the University of the West Indies ,Cave Hill Campus, Barbados - will visit Belize from 7-9 November 2010.
On Monday, November 8th, 2010, Sir Hilary will deliver a major Public Lecture entitled: “Reparations from Britain for Slavery, Native Genocide and Military Colonization” at the Bliss Centre for the Performing Arts, Belize City at 7.00 pm.
Sir Hilary is an esteemed author, historian, UNESCO Consultant and Cricketer.
During his visit Sir Hilary will meet with Prime Minister Hon. Dean Barrow, the Ministry of Foreign Affairs & Foreign Trade/NICH, Members of the Kriol, Mayan and Garifuna Councils, and will be hosted at a planned Celebrity Cricket Match in Bermudian Landing.
Sir Hilary’s visit is sponsored by The UWI, Open Campus Belize and Belize’s Ministry of Foreign Affairs and Foreign Trade in association with NICH and KREM Television.
For further information please call: 223-0484 or email: belize@open.uwi.edu Ambassador Adalbert Tucker -Ministry of Foreign Affairs & Foreign Trade 822 2110 /-669 0100.
Posted by The San Pedro Sun Newspaper at 4:24 PM No comments:

Very Important!!!
Assistant Superintendent Arnold, head of San Pedro Police has requested all photographs taken at the SAGA Halloween event be collected.
PLEASE send all photographs to ariadnetrejo@yahoo.com so that they may be collated and handed over to the police.
This is very important! Thank you. Please share this.
Posted by The San Pedro Sun Newspaper at 10:14 AM No comments: