Internationally acclaimed Jamaican artist Darrio arrived in San Pedro around 6:00pm via Maya Island Air. The San Pedro Sun was there to welcome him. Scheduled to perform on Friday and Saturday night inside Fido's Restaurant and Bar on Barrier Reef Drive, Darrio arrived early as he will be making a couple media appearances, promoting Island Invasion Easter Edition.
Darrio gives us an intro to what will happen this weekend inside Fido's Courtyard! 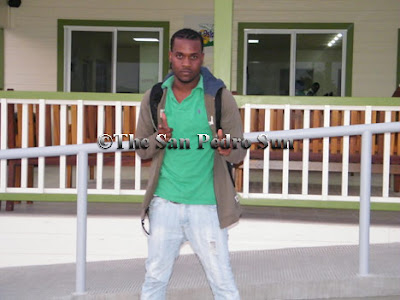 Visiting from the United States - Catherine Demdam was one of the first to meet Mr. Darrio 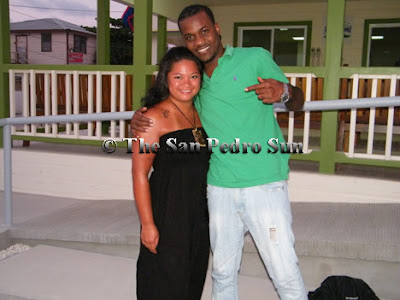 Posted by The San Pedro Sun Newspaper at 6:39 PM No comments:

The staff of the Scotia Bank Limited San Pedro Branch donated a box of assorted personal hygiene supplies to the San Pedro Cancer Society. The donation was handed over in a short ceremony at the Scotia Bank office on Saturday morning.

According to Tatiana Perez of the San Pedro Scotia Bank Branch office, the donation was a result of the staff’s “giving back to the community” program. She further informed that during Women’s Month in March, the staff brought in several personal toiletry supplies.

At the end of the month, the staff collectively agreed to hand over all the items collected to a charitable organization, which rendered help to women on the island; in this instance the Cancer Society on Ambergris Caye.

At hand to receive the donation was Treasurer Miguel Perez and member Dina Graniel of the San Pedro Cancer Society. They expressed their gratitude on behalf of the organization towards the staff of Scotia Bank for their exemplary dedication to the community. Following the donation, the supplies were distributed to females that are battling cancer on the island.

Perez explained that the staff at Scotia Bank is open to help any charitable organization and as such remains open-minded in helping make the community a better place. 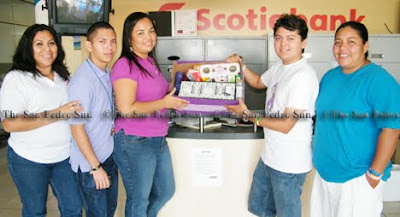 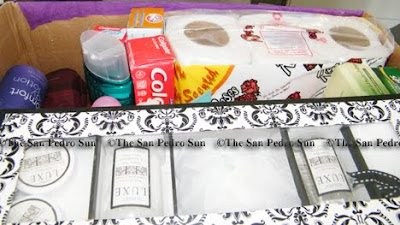 Posted by The San Pedro Sun Newspaper at 10:51 AM No comments: