A man was rushed to the San Pedro Poly Clinic after he fell off a building. The incident occurred at about 3:30 PM some 10 miles north of San Pedro Town. According to Police, the man, 33 year old Jorge Omin Trigeros was on a building at Bright Water Condos when he accidentally fell off.

According to medical officers at the San Pedro Poly Clinic, Trigeros apparently suffered injuries to his pelvic area and backbone and may have internal bleeding. Trigeros’ condition is considered serious but stable, and he was later transferred to ’s KHMH for further medical attention.
Posted by The San Pedro Sun Newspaper at 4:40 PM No comments:

Be a part of the Garifuna Settlement Day 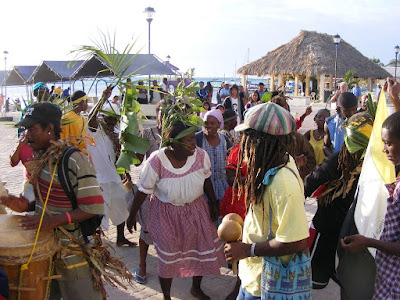 Wake up bright and early and be a part of the Garifuna Settlement Day festivities. Tomorrow morning, at 6:00 a.m., the Garinagu will re-enact the arrival of their people to the shores of Belize. Be at Central Park at the scheduled time and watch history repeat itself. During the day, enjoy the drum beats, Garifuna food and all the action at Central Park.


Happy Garifuna Day to all!

Posted by The San Pedro Sun Newspaper at 4:24 PM No comments:

The Champagne Chef and Chef Colleen Schwendinger of Rendezvous Restaurant work beautifully together creating fantastic dishes sure to be a hit in any party. Last night, they were at La Perla del Caribe filming Taste of Belize, a new TV show that is sure to highlight the explosive culinary scene in Belize. An Arilew Production, last night's shoot consisted of The Champagne Chef and Chef Colleen preparing fantastic meals for a nice cocktail party held at Topaz Villa. More information in this week's issue of The San Pedro Sun.

Tonight, the film crew will be at Fido's. So come over to see the action!
More information in this week's issue.
Posted by The San Pedro Sun Newspaper at 11:14 AM No comments: