The fourth Baron Bliss of the Kingdom of Portugal, Henry Edward Ernest Victor Bliss, was an Englishman by birth. In 1926, he sailed in his yacht Sea King to Belize and fell in love with the green Caribbean Sea, the cayes and balmy climate.

The Baron came to Belize from Trinidad, where he was a victim of food poisoning. He spent some months off the coast of Belize aboard the Sea King, attempting to recover from this illness. He never came ashore. Fishermen and colonial administrators treated him kindly and taught him about Belize. The Baron died of food poisoning, but not before he changed his will, leaving almost $2 million dollars to Belize in a trust fund. The fund is used for the benefit of Belizeans and has made possible the building of the Bliss Institute Library and Museum in Belize City, health clinics and markets around the country, and has helped with the Belize City water supply system. The Baron is considered Belize's greatest benefactor.

Part of the trust was designated for an annual boat regatta which is held every year in honor of the Baron. The focus of Baron Bliss Day in Belize City is this regatta. Other towns in Belize celebrate the day by having small boat races and parties.
There is a Baron Bliss Memorial Lighthouse and Park located in Belize City in the Fort George Area. The Baron's tomb lies under the lighthouse overlooking the harbor entrance to the city. 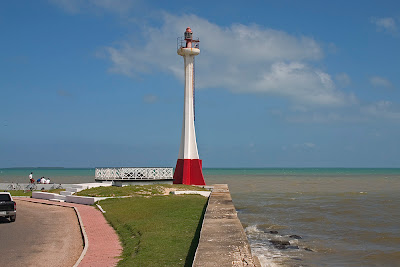 Posted by The San Pedro Sun Newspaper at 9:47 AM 1 comment: