This year's 16th annual Fire Olympiad hosted by the Belize National Fire Service Olympiad was held over the weekend at the People's Stadium in Orange Walk Town. Six proud volunteers of the San Pedro Fire Service travelled north to showcase their abilities in performing the various drills to prove themselves as some of the country's finest firemen. 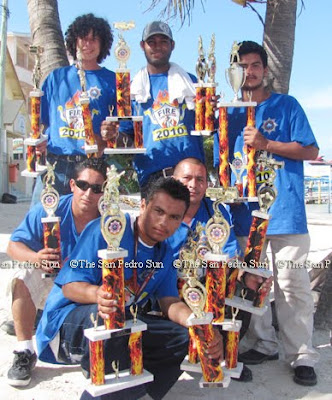 Miguel Medina lead his team of five volunteers: Claudio Tzul, Lester Diaz, Miguel Ancona, Alex Manzanero and Andy Albeño to a very sucessful performance in this year's tournament. Competitors were required to compete in ten different fire drills in which San Pedro's team managed to acquire 13 trophies for placing first and second in the various drills. Competitors were judged by the time it took them to complete each drill successfully, with the competitor completing the drill within the shortest amount of time being the winner. The overall time each team took to complete all ten drills was tabulated and the team with the shortest time won. This year, San Ignacio Fire Station took first place and San Pedro brought home the trophy for second place. Congratulations to our San Pedro Fire Department!! Awesome Job!!!
Posted by The San Pedro Sun Newspaper at 6:00 AM No comments: