Cocaine loot washes up on shore!

25 kilos of cocaine are off the streets of San Pedro Town after a local resident turned the drugs in to police. According to the Head of the San Pedro Police Department Assistant Superintendent Dennis Arnold, at about 1:30 p.m. today, a resident who preferred to remain anonymous handed over to police a bag containing 25 packs of cocaine each weighing one (1) kilo. The drugs were found some two miles north of San Pedro Town along the coast near Palapa Bar.
Assistant Superintendent Arnold stated that the resident was travelling along the beach when he noticed a bag floating along the shoreline. When the male resident opened the bag, he noticed 25 packages neatly wrapped and suspected them to contain cocaine. The resident then proceeded to turn the drugs to the proper authorities. 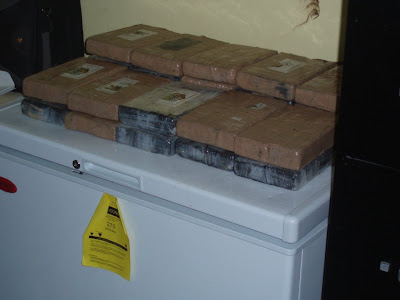 Assistant Superintendent Arnold explained that about two weeks ago, the Police Department received information of a possible “wet drop” along the coast of Ambergris Caye. He said that as a result, members of the Anti-Drugs Unit were deployed to the area where they conducted a number of operations but none proved successful. Assistant Superintendent Arnold said that it is the largest amount of drugs turned into San Pedro Police Department since his taking control of the Coastal Executive Zone. While Arnold refused to give information as to the citizen’s identity, all he would say was that it was a law abiding citizen that has been working very closely with the police department to fight crime. Arnold applauded the action of the local San Pedro Town resident encouraging others to do likewise. 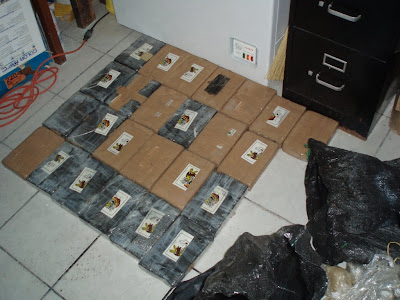 The drugs have been labelled as 'found property' and carry an approximate street value of $375, 000. Authorities claim that the drugs will be destroyed by fire.
Posted by The San Pedro Sun Newspaper at 3:58 PM No comments: