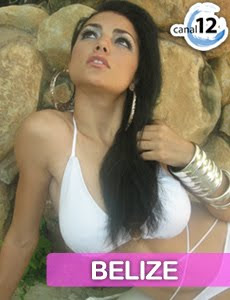 It is all taking place at the Hotel Sheraton at El Salvador - the Miss Teenager Universe Pageant. And, this year, Miss Teenager Universe will see the participation of Daniella Wooley as she proudly represents Belize. For the first time, Belize will have representation in the pageant in the form of the gorgeous 19-year-old from Esperanza Village in the Cayo District.

For the past two years, Daniella has been anxiously awaiting and training non-stop for her participation on the pageant. 21 teenagers from around the world have rendezvoused to the Central American country where they are participating in a flurry of events which will lead up to the grand night.
On pageant night, there will be seven beautiful young women who are chosen by the judges. However, an eight contestant is being chosen by you, the public. By going online you can vote for Belize's Daniella. There is still time to vote - so go ahead cast your vote. Click here to vote.
Wishing Daniella the best of luck in El Salvador at the Miss Teenager Universe Pageant.

Posted by The San Pedro Sun Newspaper at 10:33 AM 1 comment: