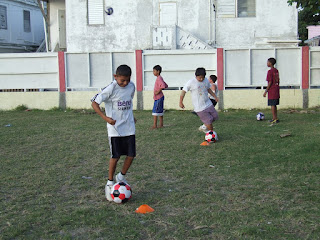 “Participation in football builds discipline and teamwork. Instilling a love for the game at a young age is my plan,” stated Gaby Arana who just recently started a football club for young children. With over twenty (20) young boys enrolled, Arana plans to make this small project for young boys a year round event. With only a few bucks for registration, Gabby coaches the kids to be better athletes and challenges them to perform well at the same time as they have fun. Under the team name of “Nairi’s Football Club”, an invitation to play against a team in Chetumal has already been extended in March. A sports enthusiast, Gaby explains that his project exposes young boys to positive peer pressure both on the field of play and in the classroom. With the hopes of getting all equipment and tools for the kids to utilize, Arana states that that is all the club needs, equipment. Special thanks to several individuals and businesses that have donated footballs and uniforms. If your child is interested to join the football club or you want to donate football equipment, you can do so by contacting Gabby Arana at 604-9443. 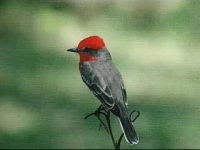 The Audubon Society turns 40 this year and as part of its anniversary celebration – they have put together a new photo exhibition. It’s called “Shutter Speed” and it opened last night at the Mexican Institute. Today we got a preview of the 53 photos which the Audubon Society says are snapshots from the 9 protected areas it co-manages. Audubon’s Publicity Officer Dirk Francisco took the photos and is in charge of the exhibition. 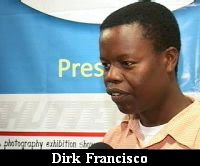 Dirk Francisco, Publicity Officer: “The name ‘Shutter Speed’ because it has something to do with a camera and because the photos are current photos. These photographs have captured history because some of what you see in the photos today, you might not see anymore or they could disappear forever."
Click here to read more
Source: Channel 7 News 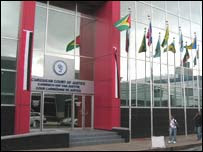 The president of the Caribbean Development Bank (CDB), Compton Bourne, says he is disappointed at the delay by most Caricom member states to fully sign on to the Caribbean Court of Justice (CCJ).
Professor Bourne says the CDB raised funds for the Court, because it had been seen as key to the region.
Boutnr stated that there has really been no proper explanation of why most countries have not acceded to membership of the court.
Almost four years after its launch, only Barbados and Guyana recognise the Trinidad-based CCJ as their final court of appeal.
Remains of prehistoric snake found in Columbia 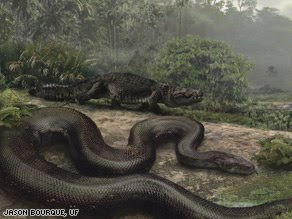 An artist's impression of what Titanboa cerrejonensis would have looked like
Scientists in Colombia have unearthed the remains of a true prehistoric monster believed to be the biggest snake ever to have lived on Earth.
Named Titanoboa cerrejonensis, the snake would have weighed 1,140 kilograms (2,500 pounds) and measured 13 meters (42.7 feet) nose to tail tip -- dwarfing the largest modern pythons and anacondas which can grow to 6 meters (19.5 feet).
Scientists believe it slithered around the planet between 58 and 60 million years ago.
Most large snakes today live in the tropical regions of South America and south-east Asia, where the high temperatures allow them to grow to impressive sizes.
Posted by The San Pedro Sun Newspaper at 10:42 AM No comments: