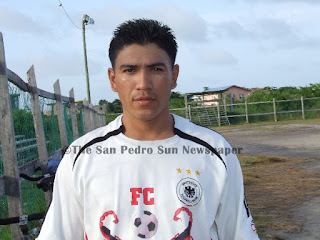 It is with great sadness that the we announce the death of Luis "Wicho" Uribio. Known for being a great football player for the San Pedro Dolphins, Wicho incorporated himself into the community through the sport he enjoyed. He will be sadly missed by all.
Funeral arrangements are being prepared and will be announced later.
Sunrise: February 18th, 1981
Sunset: January 28th, 2009
Posted by The San Pedro Sun Newspaper at 9:41 AM 1 comment:

Bonefish are a major driver of Florida’s multi-billion dollar recreational fishing industry. Based on boat and tackle sales, guide fees and fishing licenses, University of Miami fisheries scientist Jerry Ault estimates each South Florida bonefish is worth about $3,500 (u/s) a year, or about $75,000 (u/s) over its lifetime.
The Miami Herald
As the Miami Herald pointed out, the economic sport fishing value is great. For years, local fishermen and tourism organization on the island have continued their lobby with Central Government to institute a Sports Licensing Fee. Coastal Zone Management Authority signed up to the new regulation last week and many were the questions that remained after the release was issued.
In the release it was stated that any angler who wishes to engage in sport fishing will now be required to first receive a license. According to Billy Leslie of the San Pedro Tourist Guide Association explained that the fees will be payable by tourists who wish to engage in the sport. The fees have been categorized as follows: one day - $20; one week - $50 and $100 for the year.
Leslie explained, “We have been, for years, with both UDP and PUP governments, been lobbying to safeguard certain fishes, such as, bonefish, tarpon, permit, and others that will be named later.”
According to the release, in the next coming weeks, consultations will be held and anglers will have the opportunity to discuss problems and present recommendations for the betterment of the industry in a whole.
For further information about the new fees and the process to acquire a license kindly contact CZMAI offices on Princess Margaret Drive, Belize City or contact telephone number 223-0719/223-5739/223-2616.
Posted by The San Pedro Sun Newspaper at 9:40 AM No comments:

Police Dept. will use technology to combat crime

Marleni Cuellar reporting: Earlier in the newscast we reported on the brevity of the controversial Crooks Report and at today’s conference at the Raccoon Street Police Station, police told the press that the department is turning to a new strategy to combat the alarming levels of crime. And this involves the use of technology that will balance expertise and technical know-how on a limited budget. News Five’s Jose Sanchez tried to find out how this technology will bring results to the fight against crime.

Jose Sanchez: “There is a general feeling that because we have a problem with witnesses testifying, perhaps maybe the police needs to shift more to forensics. Will we ever have a fully operational forensics lab that we can depend upon?”

Carlos Perdomo, Minister of National Security: “I think we will. This is one of our programs that is slowly developing. If you look back three of four years ago there was hardly anything. But setting up a really first class forensic lab is extremely expensive. For example, to get into DNA you’re talking about one million Belize. So we do have a time line. This year we’re going to get the ballistic machine, next year we look at it—it’s a program that is slowly progressing.”

Assistant commissioner of Police Crispin Jeffries said that old fashion police work has made them able to pinpoint the areas of Belize City which are hot spots for criminal activity.

Posted by The San Pedro Sun Newspaper at 9:38 AM 1 comment:

The Prime Minister of Dominica has said he disagreed with the decision to postpone meetings of two important heads of government committees. 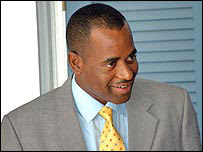 Dominica's Roosevelt Skerrit
The meetings, which were scheduled to take place in Barbados this week, were due to discuss tensions over the direction of the Caricom single market and external trade negotiations.
Dominca's Roosevelt Skerrit, who is responsible for free movement within Caricom's quasi cabinet, said the meetings should have gone ahead because of the importance of the agenda.
PM Skirret said the Secretariat postponed the meeting because some leaders couldn't attend. The meetings will now be held in Belize in March. PM Skerrit also denied that divisions among Caricom leaders led to the postponement.
Posted by The San Pedro Sun Newspaper at 9:35 AM No comments:

The IMF has said that member countries of Organization of Eastern Caribbean States (OECS) have little room for fiscal stimulus packages because of high public debt levels.

An International Monetary Fund team is visiting OECS nations during this month. A statement from the Fund, issued after a series of meetings in St Kitts and Nevis, cited the two-island federation as an example of carrying “formidably high" debt.

The island's debt stands at 170 percent of its Gross Domestic Product. The IMF said that growth in Eastern Caribbean nations would remain flat during this year, because of the global economic downturn. The islands experienced 2.5 percent growth last year.
Posted by The San Pedro Sun Newspaper at 9:32 AM No comments: