The ninth tropical storm of the season forms … headed toward Nicaragua. A tropical storm warning remains in effect for the entire Eastern Coast of Nicaragua and for the islands of San Andres and Providencia.

Ida is moving toward the west north-west near 6mph or 9km/hr. A turn toward the northwest and a decrease in forward speed is expected over the next couple of days. On the forecast track, Ida should make landfall along the east coast of Nicaragua overnight.

Maximum sustained winds have increased to near 60mph or 95km/hr with higher gusts. Some further intensification of this system is possible before landfall. Tropical storm winds extend outward up to 45 miles/75km from the center. The latest central pressure measured by an air force reconnaissance plane is 996mb, 29.41 inches. Ida is expected to produce total rainfall accumulation of 5 to 7 inches over San Andres Island with maximum amounts of 12 inches possible. Rainfall accumulations of 15 to 20 inches are expected over Eastern Nicaragua and Eastern Honduras with maximum amounts of 25 inches possible. These rains could produce life-threatening flash flood and mud slides.

Posted by The San Pedro Sun Newspaper at 4:34 PM No comments: 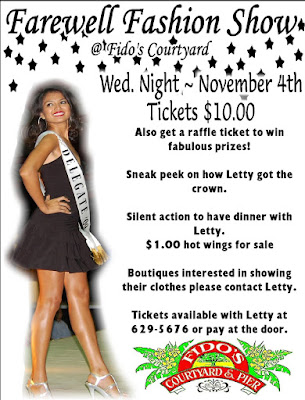 Posted by The San Pedro Sun Newspaper at 1:44 PM No comments:

NEMO to convene tonight!
from NEMO San Pedro Headquarters: Please note that we will convene this evening for an Emergency meeting to discuss Tropical Depression 11 at 7:30pm, November 4, 2009. This emergnecy NEMO MEETING will be held at the San Pedro Town Hall and will be chaired
by Her Worship the Mayor, Mayor Elsa Paz. Please be on time.
Note: Chairpersons, please inform your sub- committee members

Source: The Weather Channel
What's that blob of orange circled in the map below? It can't be? Can it? Yep. It's early November but a tropical depression has developed.
A small low pressure circulation located in the extreme southwest Caribbean Sea is now Tropical Depression 11.
During the past 12 to 18 hours, cloud organization has become more symmetric and defined. Thunderstorms continue to bubble up around the center of circulation.
The depression is close to stationary just off the coast of Costa Rica. Surface winds over land remain very light but it's more than likely higher wind speeds can be found underneath the canopy of thunderstorms. 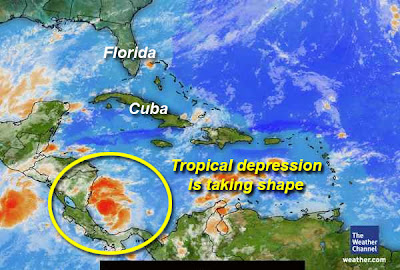 Air Force Reserve Hurricane Hunters will investigate TD 11 later today and should have a fix on the depression's center of circulation by later this afternoon.
The Weather Channel's Dr. Lyons notes that these low pressure areas near Central America are nearly always a forecast difficulty.

Computer weather models provide three different scenarios: 1) The possible depression moves slowly west inland 2) It moves slowly northwest and then inland or 3) It just drifts and remains offshore for several days in the short term, this is a heavy rain and potential flooding event for Panama, Costa Rica, Nicaragua and Honduras as tropical rainbands rotate onshore over and over again.
If Tropical Depression 11 reaches storm strength it will be named Tropical Storm Ida.
Posted by The San Pedro Sun Newspaper at 1:31 PM No comments: