This Saturday, September 26th, Corozal Town will come alive as it is the first District to host the Finals of the biggest beauty pageant in Belize. Competing for two coveted titles, Miss World Belize 2009 and Miss Earth Belize 2009, the young delegates will showcase beauty and brains for the excited crowd. 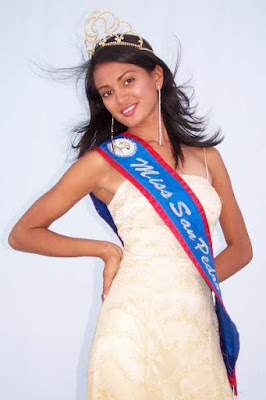 This year representing San Pedro is beauty Norma Leticia “Letty” Lara who reigned as Miss San Pedro for the year 2005/06. A graceful dancer, Letty will certainly make La Isla Bonita proud as she follows the footsteps of her sister Ceci, who was also a former beauty queen.

With Letty in participation, other participants certainly will have to put their best forward. Letty is going for the crown and the Corozal Andres Campos Civic Center will be the place where it will all happen. The winning delegates will travel to London and Johannesburg, South Africa for a month where they will compete for the 59th edition of the Miss World final scheduled for December 12th.

A press release issued by the Miss World committee, South Africa also happens to be the location for this year’s World Cup and the delegates of the Miss World Pageant will be showcased in that event, as well.

Corozal will be a flurry of activity as the top 10 applicants will also have the opportunity to compete for local titles such as Miss Beach Beauty, Miss Top Model, as well as prize packages such as Shell Free Zone’s $3,000 scholarship, a $5,000 prize package from Five Star La Perla del Caribe Resort in San Pedro Town. This year’s theme for the pageant will be Belizean Rainforest meets African Jungle and Gilharry 7 has been set as the performers for the coronation dance.

Posted by The San Pedro Sun Newspaper at 3:39 PM No comments: